Rainy Day? Make Your Own Volcano!

Anyone who’s been to Hawaii, or looked at the Pacific Ring of Fire, will discover one of Earth’s most interesting landforms – a volcano.  Despite what you may think, volcanoes are not a one-size-fits-all geophysical phenomenon.  Instead, volcanoes have their own ‘personalities’ and are formed in a variety of ways.  Now, imagine if you could design a simple science experiment for your kids and make one of these amazing creative forces right in your kitchen. The good news is you can, and it won’t leave a mess!  Well, not much. 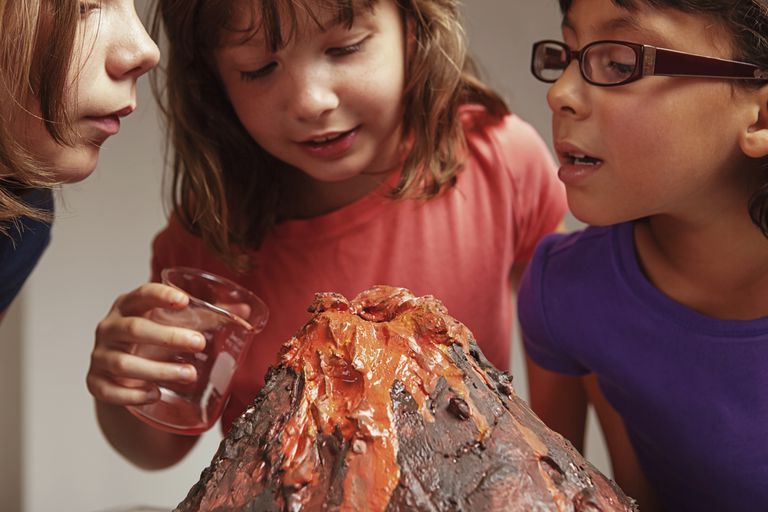 The first step is to take your young geologists and help them learn all about volcanoes before constructing an individual model of a volcano out of simple materials. The excitement builds as your ‘students’ begin asking if they’ll be permitted to simulate the eruption of their volcano!  For fun, respond by asking them if they want their volcanoes to be dormant or active volcanoes. Guess how many respond with “dormant”?

DIRECTIONS FOR HOW TO MAKE A HOMEMADE VOLCANO

To make a homemade volcano of your own, gather a Styrofoam or plastic tray, an empty film canister, and some modeling clay, then follow these steps:

This experience serves as a wonderful introduction to the concept of chemical reactions because your future scientists get to observe gas bubbles emerging from the volcano as their volcano erupts.  It’s also a great hands-on activity that makes a rainy day move along quickly and keeps the kids off their devices and/or away from the TV.  Who knows, one day you may even hear your children say, “I still have my volcano at home on my bookshelf.”

Needless to say, don’t make your volcano so immense that National Geographic includes you in their next Ring of Fire documentary!

Enter your email address below and one of our staff will be in contact with you.

This website uses cookies to improve your experience while you navigate through the website. Out of these cookies, the cookies that are categorized as necessary are stored on your browser as they are essential for the working of basic functionalities of the website. We also use third-party cookies that help us analyze and understand how you use this website. These cookies will be stored in your browser only with your consent. You also have the option to opt-out of these cookies. But opting out of some of these cookies may have an effect on your browsing experience.
Necessary Always Enabled
Necessary cookies are absolutely essential for the website to function properly. This category only includes cookies that ensures basic functionalities and security features of the website. These cookies do not store any personal information.
Non-necessary
Any cookies that may not be particularly necessary for the website to function and is used specifically to collect user personal data via analytics, ads, other embedded contents are termed as non-necessary cookies. It is mandatory to procure user consent prior to running these cookies on your website.
SAVE & ACCEPT